1) Meggan wore her first costume for a long time, before and after her transformation into a beauty. It was a simple orange-brownish, sleeveless, skin-tight suit with a turtleneck, a low-cut back and no shoes. Although she probably started to wear it for practical reasons (the costume allowing free movement of her bat wings and clawed feet), it seemed to underline her naiveté and lack of sophistication. [Captain Britain (2nd series) #5]

3) During the Cross-Time Caper, Meggan got a new more sophisticated outfit: a dark-green long-sleeved suit that left her shoulders and feet bare. Broad black stripes in the shape of the letter M accentuated her shoulders, waist and hips. [Excalibur (1st series) #14] 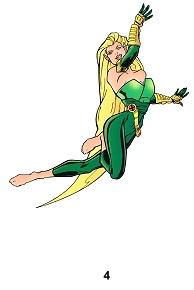 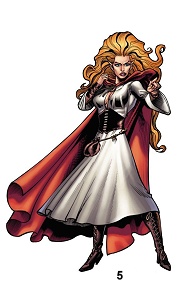 4) Later, when the team grew closer to the X-Men, Meggan felt she needed another change. She still wore a green suit (with the top in a lighter color) with a sleeveless bodice, long green gloves with golden adornments and an asymmetrical X-belt on her hips. [Excalibur (1st series) #96]

-) When Meggan nobly sacrificed herself to seal a hole in the fabric of reality created by the Sacrlet Witch’s reality-altering madness, she was again wearing her dark-green costume with the M-shaped black stripes. [Uncanny X-Men #463-465]

5) While residing in hell, Meggan adopted an altogether new look. This consisted of a low-cut white peasant dress with flowing sleeves. Her waist was cinched by a dark brown leather corset and she wore matching laced up boots. Her wrists were wrapped in brown leather straps and she wore a pouch about her waist. Over this, Meggan wore a hooded cloak in deep scarlet. [Captain Britain & MI13 Annual #1]